Show photo's of your scootering history, dont be shy, we all looked stupid back in the day

not a very nice 1986 photo because mum wanted me to be a doctor not a skinhead.

dont know why we had L plates . we had no tax,test,insurance or even f@@king logbooks in our name....hmmmm hang on a minute. more beer and petrol money. 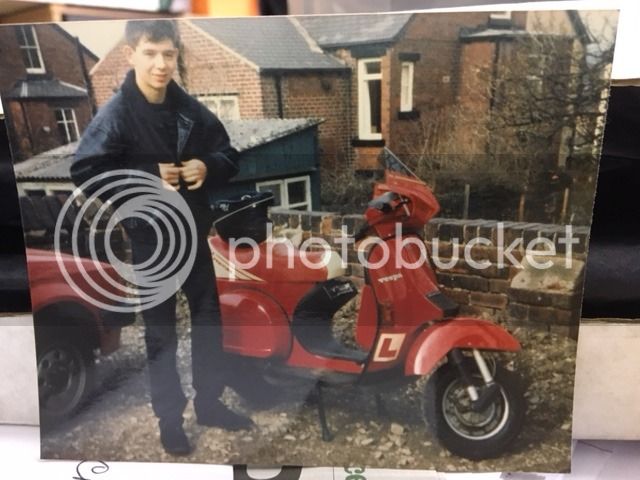 new 1986 T5 with every option from Armandos. i was amazed at how quickly my filthy Lammy paws became those of an office worker. soft and white as Nanette Newmans creamy arse cheeks.thanks fairy.

conversation in layby just after photo
chancer "HEY TONY! you want to swap that nice reliable T5 for a piece of s**t sx200 without a single threaded stud?"
me "is it noisy?"
chancer "yes and er....fast"
both "DONE!"
i was.
Alcoholic maniacs social club. out f@@k,out fight and out booze 'em.
Top

bottom pic in the background , is that dez and his multi coloured 150 super ?
Top

Oh yeah and I recognize some of my logbooks on those scooters !
Top

Is that shaun Philips with the red t5 ? but no idea who the morris dancer is ?
Top

could be steve Lyons next to the T5.
has he still got a scooter??
Alcoholic maniacs social club. out f@@k,out fight and out booze 'em.
Top

could the morris dancer be Tracey???????
Alcoholic maniacs social club. out f@@k,out fight and out booze 'em.
Top

not sure about tracey ? and last I heard I heard about steve lyons he declared himself bankrupt saying he had nowt and the powers that be checked up with dvla , came round impounded his 2 scooters and sold them off at auction !
Top

Did you become a doctor?
Top

Brill pics, reminds me of my own early years,
have you any more.
Cheers.
Top
Post Reply Previous topicNext topic
10 posts • Page 1 of 1

Return to “Now and then photos of members..”